In a recent study, researchers from Joanna Loizou’s group from CeMM and the Medical University of Vienna investigated the POLΘ enzyme and the role it plays in DNA repair. Inhibiting POLΘ represents a new approach for developing specific therapies, in particular for patients with BRCA1 mutations. The study, published in Cell Reports, shows for the first time that POLΘ fills the gaps in single-stranded DNA that excessively occur in a BRCA1-deficient genetic background, thus demonstrating its important role in keeping BRCA1 deficient cells alive.

A key gene that is faulty leading to breast and ovarian cancer is BRCA1 (BReast CAncer Gene 1), that plays an important role in the body’s DNA repair mechanisms. BRCA1, once mutated, can cause cancer to develop. According to the Center for Familial Breast and Ovarian Cancer at the Vienna General Hospital, it is believed that if the BRCA1 or BRCA2 gene is mutated, the likelihood of developing breast and ovarian cancer increases to 85% and 53% respectively. While mutations in BRCA1 and BRCA2 support uncontrolled cell growth, these mutations also lead to the destabilization of genetic material in the cell. As a result, these types of cancer cells rely on other repair mechanisms that can compensate for these defects. The dependence of cells with mutated BRCA1 or BRCA2 genes on other genes can be regarded as the Achilles heel of cancer cells since targeting other DNA repair genes can give rise to a synthetic lethal relationship. Joanna Loizou, a former research group leader at CeMM as well as an associate professor at the Comprehensive Cancer Center of the Medical University of Vienna, explains that “synthetic lethality as a therapeutic concept for the treatment of breast and ovarian cancer very specifically prevents the division of cancer cells while allowing healthy cells to be unaffected. Such therapy concepts have advantages over traditional chemotherapy.”

First authors Anna Schrempf and Sara Bernardo focused on the enzyme POLΘ (DNA polymerase theta), which is part of the cell’s DNA repair machinery and whose loss is synthetically lethal with BRCA1 mutations. POLΘ has been shown to play a key role in repairing DNA double-strand breaks. In their study published in Cell Reports, both researchers were able to show that in addition to this role, POLΘ fills single-stranded DNA gaps that are generated during DNA replication. POLΘ. “We demonstrated a previously undescribed function for POLΘ, which provides us with a better understanding of its DNA repair mechanism and the important role it plays in DNA replication. By inhibiting POLΘ with drugs, we destabilized the genetic material of cancer cells with mutations in BRCA1, slowing down further cell division and stopping growth,” explains Schrempf.

A similar approach has already been successfully taken in cancer therapy by inhibiting PARP, a protein that – similar to POLΘ – has a synthetically lethal relationship with BRCA1 deficient cells. In clinical applications, PARP-based treatments were found to be very successful, but it was also found that patients developed resistant tumors. “This makes it all the more important to understand the process of our DNA repair mechanisms in detail and to identify additional potential therapeutic pathways,” says Loizou. 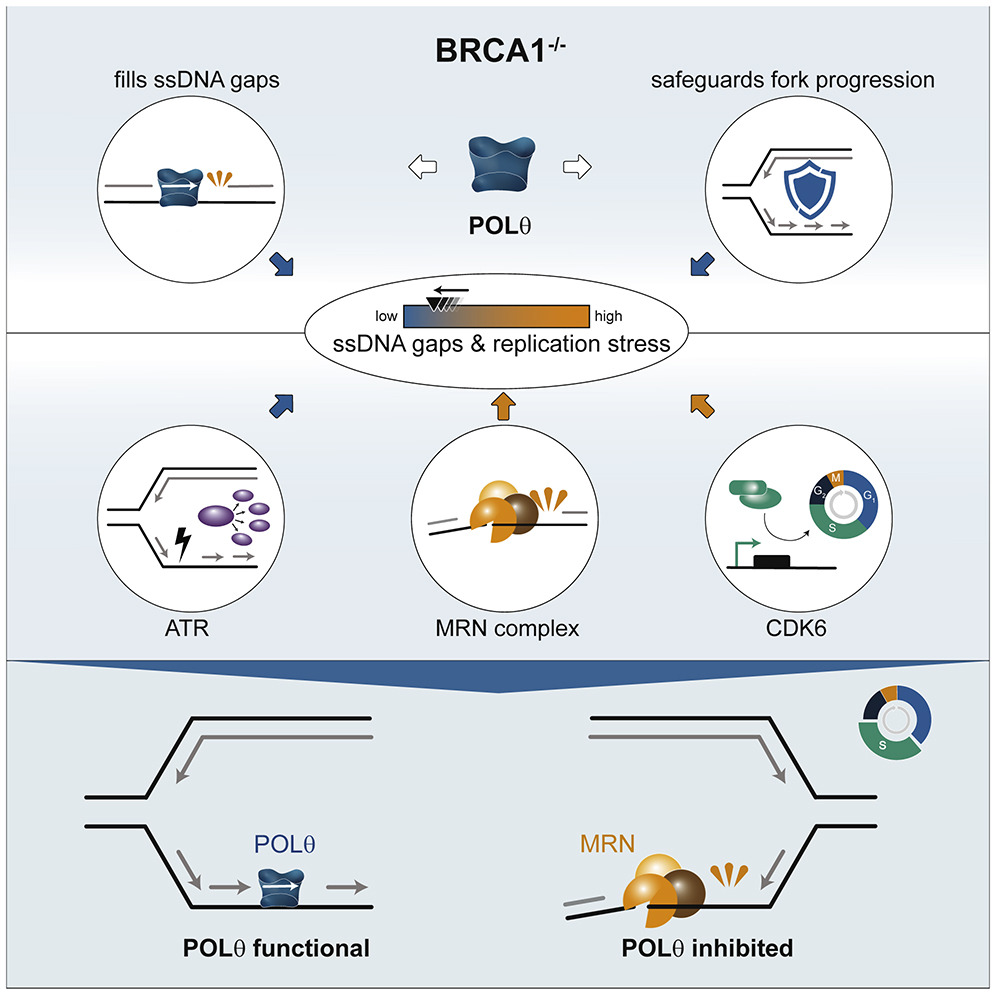